Mayim Bialik is not only a scientist (and she plays one on TV), she is also a thoughtful, observant Jew.

I'd love to share this video with you about her take on science and religion.  It would be wonderful to share and discuss with your children.

Reflections on The Six Day War on its 50th Anniversary 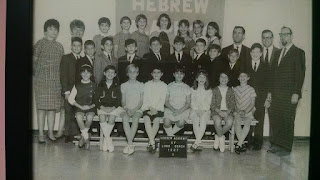 The year was 1967, 50 years ago. It was June. I know because I was looking forward to the end of the school year, which for a 9 year old who hated school and loved summer, can't come soon enough.

I went to an Orthodox Yeshiva, the Hebrew Academy of Long Beach. That meant when we got to school each morning at 7:30 we had a half hour of prayers, followed by a full morning of Hebrew studies, (Torah, language, grammar, Prophets) lunch, then a full afternoon of secular studies. We were dismissed at 4:00.

This was not my first introduction to Israel. I came from a home that was ardent Zionist. When he was growing up, my father, Sam Alexander, z"l, was a member of the Hashomer Hadati, a religious Zionist group.  His mother, Minnie Alexander, was a founding member of a women's Mizrahi chapter in Brooklyn, a women's Zionist volunteer organization. My dad, a WWII veteran, joined a garin of like-minded Americans in 1947 with the specific purpose of making aliyah, and trained to be a medic, which came in handy when he joined the Haganah (the pre-Israel Army) and fought in the War for Independence in 1948. Both my mother, Leila, and her mother, Freida Blum, were active members of Hadassah, another women's Zionist organization.  It was in my blood.

I was raised on this, plus all the songs I learned as a child were songs of longing for Zion, Jerusalem restored, about Israel being the beating heart of the Jewish people, such as HaKotel (The Wall)

But then something happened in early June. The entire faculty was abuzz.  We learned that Israel was under attack from all sides. Five surrounding Arab nations started bombing and attacking Israel.

As the news reports came each day, our entire school gathered together in the cafeteria for special prayers.  It was the first time I saw grown ups collectively weep and also the first time that I realized how vital prayer was to a people. If anything could stop that war, it was the voices of the hundreds of students and teachers in our cafeteria; our prayers.  My prayers.

Later that week I went into New York City with my best friend and I'm sure there was a parent involved but whose I don't remember. We ended up at the Magen David Adom (The Israeli Red Cross), and made endless phone calls asking for money that was so dearly needed.  To this day, I don't know how they let two 9-year-olds do this, but no one asked questions, they were grateful to have us. As I recall we got may pledges. 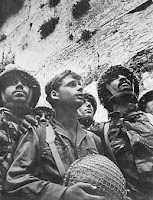 Skip to the latter part of the week. A miracle occurred.  Our prayers were answered.

By the time of the June 11, 1967 cease-fire, the Israelis had captured the Sinai Peninsula and Gaza from the Egyptians, the Golan Heights from the Syrians and the West Bank from the Jordanians. But the real prize was the liberation of the Old City of Jerusalem from Jordan, which had ruled it since 1948. David Rubinger’s famous photograph [see left] of a few young soldiers from the Israel Defense Forces reaching the ancient stones of the Western Wall, the most sacred spot in Judaism, has become the iconic Jewish image of the past 50 years. Multiple generations have been raised on this tale of triumph.

Elie Weisel wrote: For Jews around the world, these last events are a deep source of pride. Every Jew witnessed and survived this trial together. Rarely, as a people, do we feel such a deep connection to each other, of loyalty to the purest principles driven by our shared history.

And yet, Israel still struggles, for whenever there is a victor, there are those who lose: sometimes their lives, their homes, their land. There remains the problem of the Palestinians, who claim the same area of land. Did you know that only about 1% of the world’s refugees and displaced people are able to return to their homes each year? Yet we hear no criticism of most nations on Earth, save Israel, and always hear: why isn't Israel doing more?  Israel is not perfect, and continues to look for a partner in peace, one that does not insist the map of Palestine occupy the entire area from Jordan to the Mediterranean, but one that makes way for Jews and recognizes Israel as a sovereign, Jewish nation.

At the end of every Passover Seder we say L'Shanah Haba-ah Beyrushalayim, Next Year in Jerusalem. Let us continue to hope and pray for the day when Israel and her neighbors can find and live together in peace. 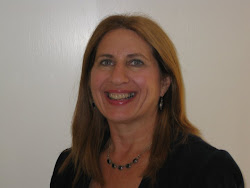